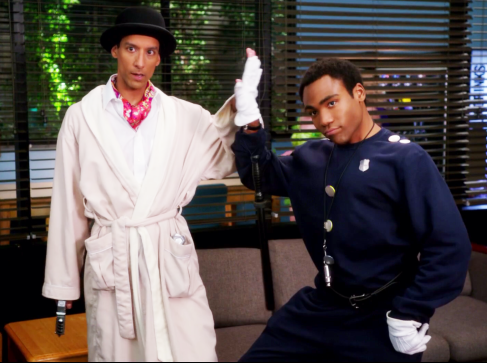 In the TV wars, we see the struggle of David and Goliath in the form of Big Bang Theory vs. Community every Thursday night at 8pm. The Big Bang Theory, known for low-brow predictable jokes and widely accepted humor, outperforms every show in Nielsen ratings averaging in 11 points in the 18-42 year old category. How many points does Community earn? Usually about 1. But what Community has every Thursday night (that BBT doesn’t) is a trending topic on Twitter, and a fan base that will go out and buy items based on the ads they saw during Community…all to save their struggling show.

That is the kind of audience every brand desires. They want those evangelist who will protest to save their product and defend it against any haters. How did Dan Harmon get these followers? How did the little show that could, only 4 years old, have a fan created art show and brought 100 people together for a fan convention?

1) Make them be a part of your product. Dan Harmon would parody (I mean “homage”) several movie genres, tv tropes, and escapades. But he also paid homage to his fans. The fake interaction between Jeff and Annie over the music of “Gravity by Sara Bareillis” was a tribute to a fan-made video of the same content. Viewers went nuts! They felt as if what they said and do had an impact on the show.

Another example is when Jeff says “Sorry Gwinnifer I can’t make it. Well tell your disappointment to SUCK IT. I’m doing a bottle episode!”. The fans knew that Gwinnifer was someone who has been tweeting hateful things at Dan Harmon. It’s like the viewers are in on a big inside joke and watching this show makes you feel exclusive. And that’s what you have to do to your fans. You have to let them know that what they say and do has impact. Now, the hard part is weeding out what’s worthy of content from what’s not…but that’s why you hire funny and quirky social media managers!

2) Always be thankful. Community has some big names. Joel McHale, Chevy Chase, and Ken Jeong. They also have some young, up and coming actors and actresses including Alison Brie, Danny Pudi, and Donald Glover. These power players have thousands of followers and enormous influence. Whether its Yvette tweeting a fan-made Community video she loved or Gillian replying to someone on Vine who asked her to prom, they make the fans feel special. And they constantly remind the fans of how thankful they are for all of the support.  Sometimes that’s all you need to do is to remind the fans that you are what you are because of them, not because you have an amazing marketing genius or a team of brilliant engineers. Your fans make you who you are today. There isn’t a ramble from Dan Harmon that goes by where he isn’t constantly reminding everyone that the fans of Community are the best fans any show could ask for.

3) Have fun with it. Dan Harmon turned what a hater said into a timeless joke on Community. He constantly pokes fun at Big Bang Theory, Glee, and his own work. A brand thats willing to joke around with their audience is a brand that’s relatable and trustworthy. The way Dan was able to listen to his audience and turn it around into a joke gave Community a personality. It was like the show was some person we could interact with. He made Community relatable, which is why so many viewers have such a strong connection to a show that can make you laugh and cry all in the same episode.

Now if you weren’t able to tell already, I love this show. It is the best sitcom since Arrested Development and deserves to stay on the air. #Sixseasonsandamovie

One thought on “3 Takeaways Marketers can Learn from Community, the TV Show”